Alon Zakaim Fine Art has the pleasure of presenting Progressions, a collection of both seen and unseen paintings by the Op artist Yvaral, to be held in their Dover Street gallery. The son of the famous kinetic artist Victor Vasarely, Yvaral took influence from his father's complex and futuristic technique whilst evolving and metamorphosing the content into his own unique style. Alongside his abstract, geometric works, Yvaral also fused this structural method with images of Marilyn Monroe, the Mona Lisa and the Statue of Liberty to create dense and vivid portraits.

The exhibition will showcase pieces by Yvaral spanning the 1960s through to the 1990s, a period of intense productivity and creativity for the artist. The paintings utilise rigorous colour interactions and geometrical shapes to achieve their optical illusions of spatial depth. Within these pieces Yvaral employed moiré effects, in which two overlaid grids create the appearance of perspective; and 'optical acceleration', which gives the artworks the illusion of having movement whilst the viewer is stationary, suggesting projection and recession within the work. He aimed to create a visual language based on simple codified and programmed elements, reflecting the increasing interest in digital media and the evolution of the computer during this period.

From the 1960s onwards Yvaral is best known for his use of numerical art, in which his paintings are composed according to numerical rules or algorithms. Whilst he often used computers to digitally process and manipulate the images, the final pieces are always hand painted. His preoccupation with numerical art manifested in the Cubic Structures and Structural Horizons series of the 1960s and 1970s, displayed in the exhibition.

Yvaral approached art with a strong scientific spirit, similar to the other members and co-founders of Le Group de Recherché d'Art Visual (GRAV), which included the artists Le Parc, Morellet, and Sobrino. Yvaral said of his practice: "All my work can be reduced to systems of organization used by contemporary scientific research." Yvaral continued to exhibit with these members globally until 1968.

Yvaral studied graphic art and publicity at the École des Arts Appliqués in Paris where he experimented with geometrical abstract art. Later, in 1960, he co-founded Le Group de Recherché d'Art Visual. He made his first completed works with the movement in 1955. In 1966 he had his first one-man exhibition at Howard Wise Gallery in New York. His work is included in numerous important public and private collections around the world, including Tate and MoMA, and has performed well on both the primary and secondary markets. 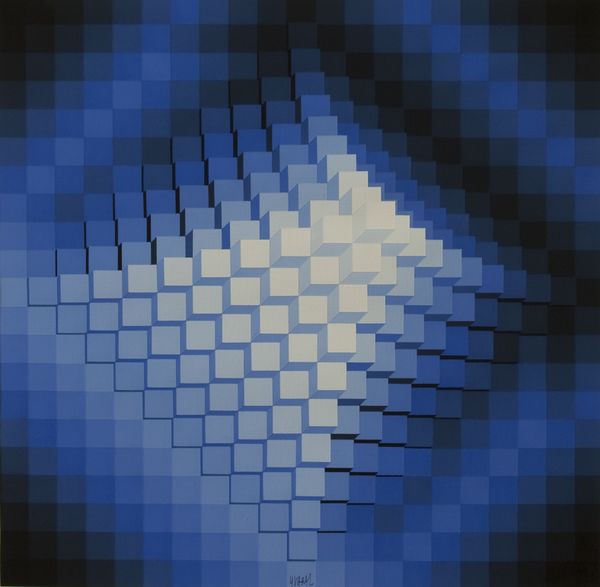