Alon Zakaim Fine Art is pleased to present Origins, their second solo exhibition dedicated to the work of British sculptor Paul Vanstone. Featuring previously unseen works, the exhibition showcases Vanstone's sophisticated relationship with his materials and ability to transform blocks of marble into a range of unique sculptures of exceptional quality.

Carved from stone handpicked by the artist from around the world, the highly polished and intricately veined sculptures are the result of Vanstone's meticulous artistic practice. He has inherited the millennia-old fascination with the possibilities of marble to depict the human form, reducing and refining his medium to create totemic heads, elegant torsos and reclining figures.

Vanstone's oeuvre is a hybrid of the classical and contemporary. Drawing upon the traditions of ancient sculpture, he adopts an abstract and minimalist approach to the human figure. His carved studies of cloth evoke classical representations of dress, yet Vanstone's sculpted folds are stripped back and stylised with a modern and unadorned simplicity. In an exciting new series of reclining figures, Vanstone reduces the body to sinuous curves and minimalist shapes, stylistically recalling the figurative works of Henry Moore. Along with a wider selection from Vanstone's outstanding body of work, Origins highlights the artist's skill at working harmoniously with his materials, the beauty of which he exploits to create forms ranging from the intimate to the monumental.

Paul Vanstone gained his MFA at the Royal College of Art before working for leading artist Anish Kapoor for five years. His works have been shown in the Victoria and Albert Museum and the British Museum, and he has been commissioned for various large scale public works. Vanstone has received several important awards, including the Darwin Scholarship, the Henry Moore Award, and the Lord and Lady Carrington Sculpture Garden Commission. He exhibits annually at the Chelsea Flower Show and his works are held in important private collections worldwide.

Origins will be on show at Alon Zakaim Fine Art's Dover Street gallery from 3 July - 16 August 2013 (*Extended until 22 August by popular demand*). Gallery opening hours are 9am - 6pm, Monday - Friday; or weekends by appointment only. 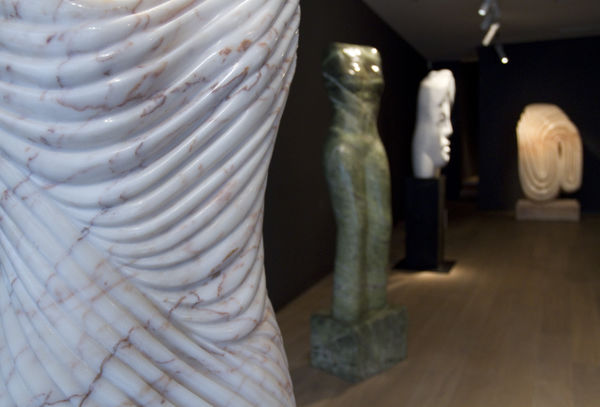