Alon Zakaim Fine Art and Melzi Fine Art are proud to present Dinamicaダイナミック, one of the first exhibitions in the UK of Italian and Japanese post-war art from the 1950s to the present day. The exhibition will explore the evolving concepts, aesthetic parallels and thematic connections between Italian and Japanese artists aspiring to transform and redefine their art in the aftermath of World War II. Key Gutai artists, Shozo Shimamoto, Yasuo Sumi, Shu Takahashi and Kazuo Shiraga will be presented alongside Italian post-war masters such as Lucio Fontana, Enrico Castellani and Arnaldo Pomodoro. The show will also trace their continual influence by presenting a selection of works by contemporary Japanese and Italian artists including Kenjiro Azuma, Koji Yamamoto, Matteo Negri and Stefano Perrone.

In the wake of World War II, totalitarian regimes were brought to an end in both the East and the West. Established cultural ideas were challenged and fascist tyrannies rejected resulting in a new found aesthetic freedom. Artists in both Italy and Japan responded by experimenting with a diverse body of work.

Japanese art expanded with new materials, radical subject matter and experimental performances, manifested by artists like Shiraga with his barefoot paintings. Meanwhile Italian artists such as Castellani and Fontana experimented with spatial perceptions and the idea of the canvas itself to redefine and question established artistic modes.

Throughout the exhibition distinct parallels and compelling comparisons will be explored by placing the art of the East and West in juxtaposition. The show will address the relationships of materiality, composition and process in order to examine the artistic similarities and differences between the two cultures. Takahashi's R6.45 (1966) explored the blurred boundaries between painting and sculpture, concurrent with manipulated canvases such as Superficia gialla (1984) by Italian contemporary, Castellani. Punctured works such as Shimamoto's Hole (1985) and Fontana's Concetto Spaziale (1962) explored the use of both positive and negative space, highlighting a mutual interest in pushing the extremes of canvas. Strikingly similar, both visually and conceptually, Shimamoto insists that neither artist was aware of the others practices, although Fontana was featured in Gutai journals from the 1950s onwards. Despite a strong contrast between the fundamental geometrics of Pomodoro's Torre a spirale (1985) and the more earthly, tactile nature of Azuma's La goccia (2016), a shared gravitational aesthetic can be found between them. The simplicity by which they have been able to represent geometry and nature has allowed for successful translations into monumental reproductions, which are admired in public spaces worldwide.

Dinamicaダイナミック will highlight the shared spirit of investigation that resulted in the evolution of a new aesthetic in both the East and the West. The viewer is encouraged to look deeply at the art on show, discovering their own interconnections between the works produced during this dynamic post-war period and the enduring influence on contemporary Italian and Japanese artists today.

Dinamicaダイナミック will be on display at Alon Zakaim Fine Art, 5-7 Dover St. London W1S 4LD from 3 October - 7 November 2017. Entry will be free to this selling exhibition and gallery opening hours will be 9am-6pm, Monday-Friday. Weekends by appointment only. 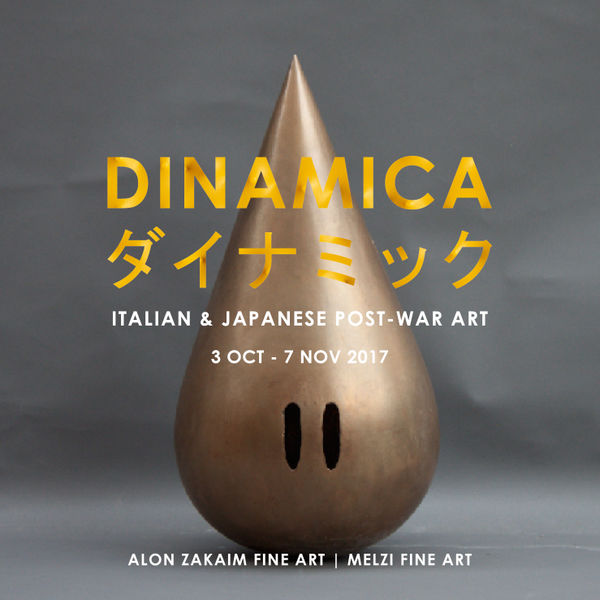