Raoul Dufy was a Fauvist painter who was born in France in 1877. He had a colourful and decorative style which greatly influenced the designs of ceramics and textiles during the period. He is most famous for his open-air paintings of French leisure scenes yet it is also worth noting his interest in book illustration, printmaking and set design.

After leaving school Dufy enrolled in Le Havre's Ecole d'Art where he met artists such as Raymond Lecourt and Othin Friesz, during this stage he predominantly painted watercolours of local landscapes.

After winning a scholarship in 1900, Dufy moved to Paris to study at the Ecole Nationale Superieure des Beaux-Arts. Here he concentrated on improving his draughtsmanship and also became influenced by the work of the Impressionists; in particular the landscapes of Claude Monet and Camille Pissarro. He exhibited at the Salon des Independents in 1903 where one of his paintings was bought by Maurice Denis. In 1905 Dufy first saw the work of Fauvist artists such as Henri Matisse and was inspired by their use of bright colours and bold contours. Dufy's style can be characterised by the use of bold outlines painted over thin washes of colour applied quickly in different sections and blocks. This manner of painting came to be known as stenographic. 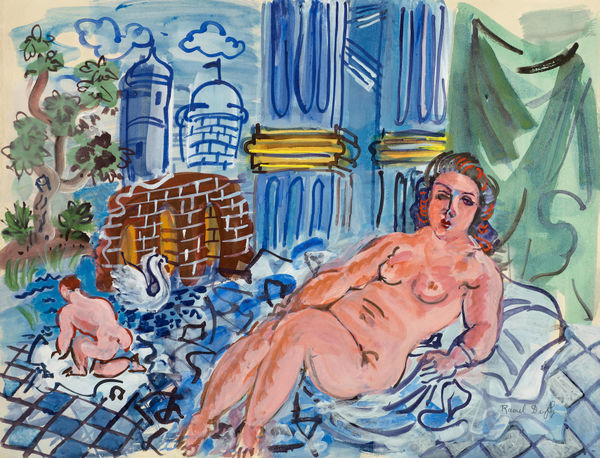