Abstract artist Jean-Paul Riopelle became the first Canadian painter to achieve international recognition for his expressionist style that is often compared to that of Jackson Pollock. Born in Montreal, Riopelle attended the École des Beaux-Arts before going to the École du Meuble between 1943-45. There he became associated with the Quebec avant-garde group Les Automatistes which included the founder Paul-Emile Borduas, André Breton and Marcel Duchamp who practiced theories concerning automatism and surrealism.

Riopelle moved to Paris in 1947, where he continued experimenting within the Surrealist circle and was the only Canadian artist included in the well-known Exposition Internationale du Surréalisme at Galerie Maeght in Zurich. During his years in Paris, he developed many close friendships with artists like the American expatriate painters Sam Francis and Joan Mitchell who formed part of the School of Paris. The same year he met Georges Mathieu, a French abstract painter, who included him in the exhibition L'imaginaire at Galerie du Luxembourg.

Riopelle gradually moved away from his lyrical, abstract style of painting and began using pigment straight from the tube over multiple, large canvases in thick impasto strokes. His first solo show demonstrating his new work was at Galerie Nina Dausset in 1949. Later, his work was exhibited in America; his first solo show was held at the Pierre Matisse Gallery in New York, in 1954. In the 1960s, his canvases became even wider and began to express an 'abstract landscapism.' Riopelle began to work in multi-media such as lithograph, pastel, sculpture, as well as painted collage assemblages from 1967 for which he became known.

In 1889, Riopelle returned to Quebec where he would spend the rest of his life. When the artist passed away in 2002, a state funeral was organised in his honour, demonstrating his popularity at that time. 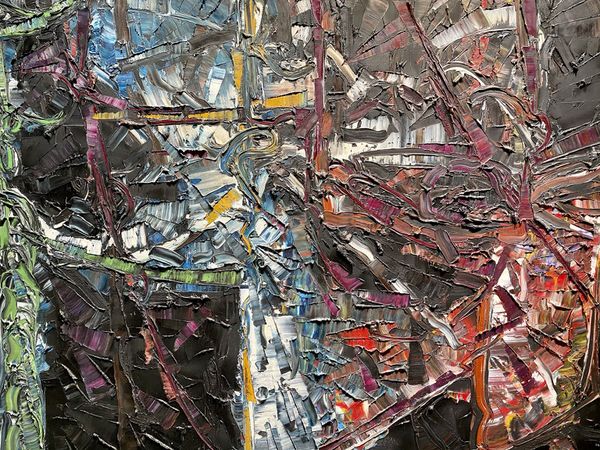