Derek Paul Boyle is a contemporary American artist who works with performance, sculpture, photography, and video. His work is often humorous, giving anthropomorphic qualities to everyday and banal objects.

He is particularly recognised for his series of 'Drag Paintings', created by dragging a canvas through the streets of Los Angeles by foot on motorbike. Performance-like, he drags the canvas under his foot, periodically stopping to check the different marks and textures formed on the canvas. The process is repeated until the canvas is, in the mind of the artist, finished. Of his works, Boyle has said "The drag paintings are events as objects - abstracts of the physical grittiness and intensity of Los Angeles's traffic infrastructure. Engaging the history of action painting and extending the concept of mark-making, these works present the aesthetics of chance combined with the severity of effort. The risk involved, both physical and legal, has produced a series imbued with the dark beauty and oftentimes overwhelming extremity that is Los Angeles."

Derek Paul Boyle received his MFA from Rhode Island School of Design and lives and works in Los Angeles, CA. 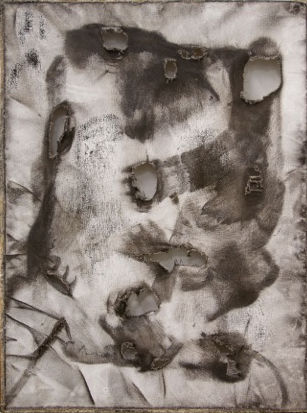